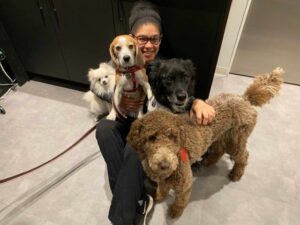 A lifetime resident of Scarborough, Danielle graduated from David and Mary Thompson Colligate Institute.  After a year of psychology at the Glendon Campus of York University, Danielle continued on and graduated from the technician program at Northern College in Haileybury, Ontario.  In the summer Danielle can be found camping, hiking, sailing and swimming, often up at her favorite cottage in Bancroft. A lover of music, Danielle is a frequent attendee of Toronto music festivals including Caribana and Boots & Hearts. Inheriting her love of animals from her Nana, Danielle is not only passionate about dogs and cats (especially her Bengal/Sphinx Lilo) but she is a great admirer of bats (“who says fruit bats are not adorable!”) 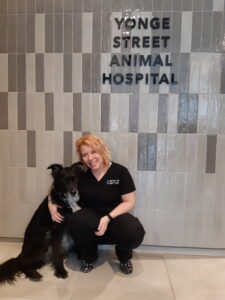 Jessica was born and raised north of the city in Newmarket Ontario.  Before going to Seneca College to become a Veterinary Technician she went to Lakehead University where she earned an Honours and Master’s degree in English and Literary Studies.  Upon completing her Diploma program at Seneca College Jessica became registered with the OAVT.   Her passion for animal care and love for community involvement brought her to Yonge Street Animal Hospital.

Ana Greenhalgh hails from Campinas, Sao Paulo, Brazil.  She says the most exciting moment in her life was in August of 2016 when she moved to Canada.  A graduate of the Veterinary School at Sao Paulo State University in 2009, After attending English school and volunteering at Yonge Street Animal Hospital, Ana has joined the team as a veterinary technician, as she works on her qualifications for veterinary licencing in Canada.  Ana was accompanied to Canada by 2 cats, Pretao and Gordinha as well as her husband of 2 years.  In her spare time Ana can be found exploring Ontario especially on her bicycle.

Ali Solman was born in Toronto, Ontario where she currently resides. She attended Subway Academy High School where upon completion she received a Pampered Paws Grooming Academy Certificate in 1998. Ali joined the Yonge Street Animal Hospital team in 1998 as a volunteer, and was offered a position to work as a Kennel Assistant in December of 1998. Over the years, Ali has grown with the clinic by expanding her knowledge and skills in the veterinary field. She is currently employed as an Associate Technician, but also finds time to work as the Groomer on Tuesdays and Thursdays.

Ali has an extensive background in volunteering which include places such as Delisle Youth Services, Sick Children’s Hospital, Toronto General Hospital and with the Animal Aid & Adoption Society. Two major accomplishments Ali has, are receiving a certificate from Hill’s for Veterinary Nutritional Advocate, and being employed at Yonge Street Animal Hospital as an Associate Technician. 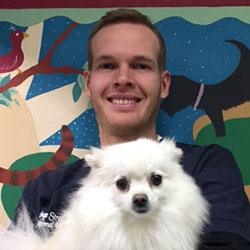 Tharsis Bastos Jr joined Yonge Street Animal Hospital in November 2017. Hailing from Uberaba in the state of Minas Gerais, Brazil, Tharsis moved to Canada this past summer with his wife Laurene and his 4 year old Pomeranian, Cleo. Together with his family, Tharsis has been enjoying exploring Toronto, especially checking out Sushi restaurants and hanging out in Eglington Park with Cleo.  One of the most exciting moments so far was when they experienced their first snowfall! As a graduate of the University of Uberaba (Uniube), with a Bachelor Degree in Veterinary Medicine, in his home town in Brazil, Tharsis is using his experience at Yonge Street Animal Hospital to prepare him to obtain his Veterinary Licence in Canada.